This is our third show tonight, after seeing Rich Robinson playing an acoustic free showcase @ fargo Store @ 6:00pm (click for video, pics and short review) and FOALS playing at Canal+ tv show L'Album de la Semaine, and the second with none other than Rich Robinson from The Black Crowes fame.

He's playing David Lynch's club : Le Silencio which is a private club only opened to members, membership is costing you your right arm and you have to work in media or art to be a member. 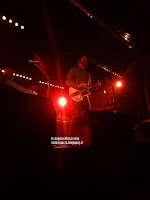 We went to see The Rolling Stones playing a club show last October @ Trabendo then we went to the Stones once again playing a private show for some bankers @ Théatre Mogador and finally we were invited by The Rolling Stones to attend one of their rehearsals, needless to tell you that even without being a member getting in was a piece of cake.Well sort of... thanks to the man who invited me in.

Beautiful club but there's nobody, I could see the raffle winners from fargo (check the link for story) and some other guests from the band that were at Fargo, can't believe that Rich is gonna play in such a tiny room in front of 60 to 80 people including members of the club.
It's like attending a gig in my living room !

Rich is playing with his band and is starting the gig with a very cool instrumental from an unknown German band Agitation Free that is sounding like The dead, from the back the sound is neat but down the front it's a bit loud and it's hard to hear the second guitar or lap-steel.
We have some new song form the new album. Rich is probably not the best singer but when it comes to playing the 6-string, as american would say: "The motherfucker can play".
Lots of extended soli and jams all along the set as we like them: cool, innovative and fluent.
I haven't heard such classic guitars for a long time, last time being the last Black Crowes show in Paris or the Winwood/ Clapton concert @ Paris Bercy.
The fender Rhodes is adding some extra flavour specially on War's "war drums" cover song, but still we have more and more guitars...
the band is not leaving the stage for the encore.
This day wouldn't be perfect without a Rolling Stones song "Winter" from "Goats' head soap" and final song of this 60 min set Fleetwood mac's "Oh Well"
Terrific !!!