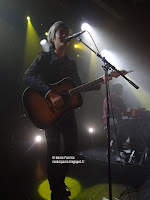 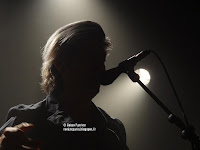 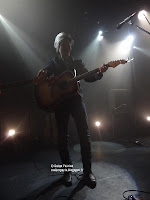 
Hard to believe that there is a show tonight @ Maroquinerie, when we arrived there at 8:00pm , there's no one outside, in fact people are waiting in the corridor, no more than 10 people and everybody's waiting for the guest list to open.They do have several guest-lists and they are full of names so I guess that they only sold a few dozens tickets.
James Iha is playing with two musicians, one on guitar and one on keyboards plus a drum machine.
He's playing mainly his new album, well it's for most of it dull and boring, there are a couple of covers: Patti smith's "dancing barefoot" and the SPumpkins' "mayonnaise" and these two are the only decent songs performed tonight. His voice is weak and sometimes off key, he looks as if he doesn't give a fuck.
60 min show with no encore,  he didn't come back even though people asked for more, I'm really wondering why they asked him back, it was sooo boring.
Hard to believe that this guy was in the Smashing Pumpkins.

What the fuck was I doing here when Mark Lanegan is playing at the Trabendo ?!?