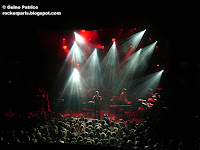 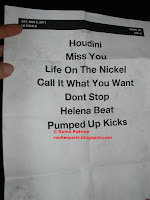 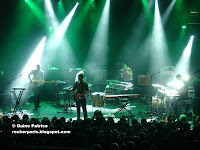 We arrived just in time for Foster the People, The Cigale is rammed most of them female teenagers. This show is one of the few that is sold-out and it was sold-out a long time ago.
This band is welcomed by those kids like the new messiah, hard to get into the music at first as it's another band playing some dance-rock music and we hate that shit but I have to admit that they have some cool up-tempo songs and the floor of the theatre is like a trampoline as the pit is jumping up and down.
Not really our cup of tea but entertaining set.

After an intermission, the artist we came here for: Miles Kane (former The Rascals & Last Shadow Puppets).
Third time we're seeing him as a solo artist, first time was at l'Album de la Semaine for Canal+ and last time was @ Rock en Seine Festival, each time he did a very good set. 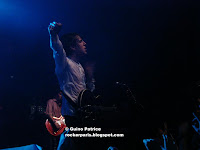 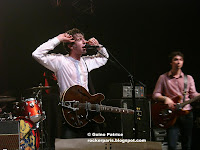 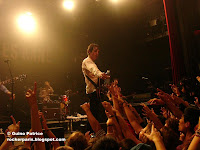 Miles Kane
Don't know what happened to him tonight but he probably took some uppers before the show or maybe he just watched the show of Foster the People thinking he had to do a better performance.
Usually he's always cool and smiling but tonight Miles was completely enraged for the whole gig. I've never seen him like this before.
No need to tell you it was rocking like never before.
We had two treats : first a cover of Jacques Dutronc in English ("Le responsable" click for original version) and second a new song "Woman' s Touch" here on video
Great gig. 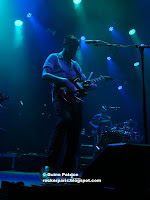 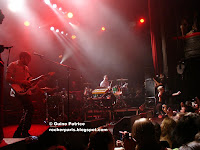 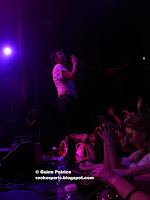 Another of those Dance-rock band is closing tonight well in fact it's more disco-funk -rock with brass and a crazy singer dancing like a idiot for the whole set and making the show.
He sung a whole song crossing the pit from the stage to the back.
They also have a very funny drummer who really looks like a young Brian Wilson ( Navy sweater included) banging his drums like a maniac for the whole gig as if he was at the Rio de Janeiro carnival. Hard to believe he could drum like this as ALL the songs have a very fast beat.
Once again not our drug of choice for the music but entertaining. 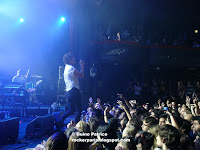 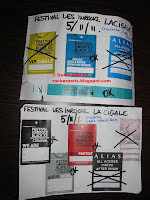 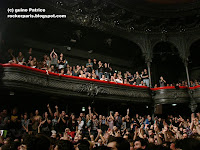