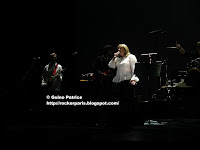 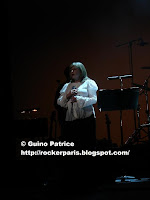 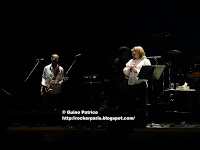 Wayne Kramer from the MC5 on guitar (on the far left)

Marianne Faithfull is back in Paris for two shows at the posh Théatre du Chatelet, one of the most beautiful theatre in Paris. She's promoting her latest album Horses & High Heels.
We've already been here a few times including a great intimate concert with MUSE in Sept 2009.
It's sold-out tonight even though there are still a few empty seats, it's an early start as she's getting on stage at 08:05 pm.
When we met Marianne @ Fnac Montparnasse in February she told us that Wayne Kramer, guitar player from The MC5, would be there. Cool he's here tonight. 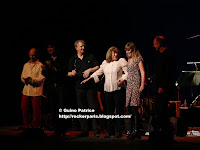 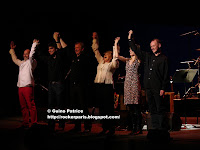 No big production, just Marianne and her 5 musicians, she's center stage with a shiny white shirt, lyrics by her side, she won't look at it fo the most famous songs.
She played a few new songs including the one composed by French singer Laurent Voulzy, I didn't see him in the audience but there was Jane Birkin and the French Minister for the Culture frederic mitterrand , who gave her a medal after the show in the dressing rooms.
The concert started smoothly with the atmosphere building up slowly.
Her voice is really rock, posh people woke up when she played her most famous songs (Working Class hero, As Tears go by, Broken English...) even though no one clapped when she started playing Sister Morphine. Maybe they've never heard the Rolling Stones.
Sound is perfect, not too loud, Wayne Kramer is providing great guitar licks doing most of the soli tonight.
The gig was more rock than last time for her shows @ Cité de la Musique (review of second show is Here) for the Easy Come Easy Go Tour 2009.
The set ended with her cover of a Tom Waits' song before she came back with only Doug Pettibone on guitar.
We had an extra song a cappela "Love is teasing" (click for video) by the Chieftains. 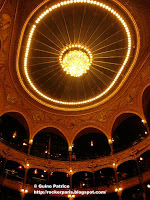 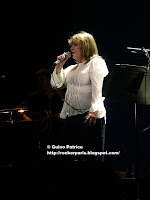 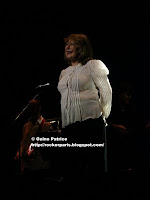 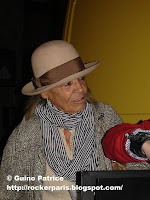 Great 1h50 min show we're going back tomorrow night.
There was a aftershow party in the dressing room where the Minister for the french Culture gave her a medal (Commandeur dans l'ordre des Arts et des Lettres). 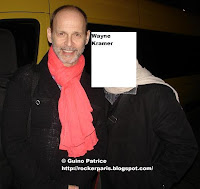