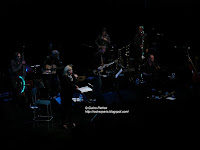 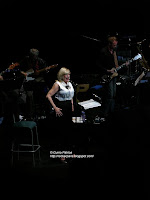 Marianne Faithfull , 60's Icon is playing the first show on her " The Easy Come Easy Go Tour 2009". This is also the first of two shows in Paris , She'll be back here tomorrow.
The place is packed but not sold-out , there are still a few tickets left at the Box office for tomorrow as well. It's an all seated event even tough it's a first come first serve.

Many musicians on stage tonight ( 9 ) , the bass player is probably the Musical director as he's nodding to the others for the fade in and fade out.
Marianne is relax stuck behind her mike and looking sometimes at the lyrics on her left side.
I'm not too familiar with the recent material but the songs are going down well with the full band and the orchestration is really nice , rock with a bit of Classical with cello , violin and flute.
She doesn't talk that much between songs but takes the time to thank the audience several times.
See her version of " as tears go by " below ( she hates that song ). We also had "Broken English" , " Lucy jordan" and a geat version of " Sister morphine" all played earlier in the set.
Last song was a slow song with just the guitar player.
very good set , see ya tomorrow. 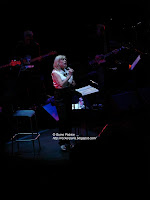 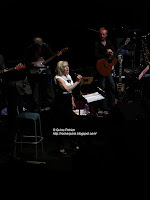