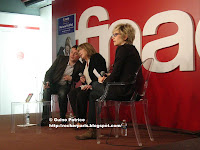 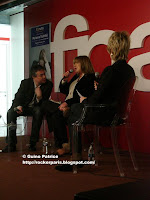 The Fnac store in Montparnasse is organising a meeting with Marianne Faithfull to promote her brand new album "Horses & High Heels".
She did many radio & tv interviews these last couple of weeks including "One shot Not" for Arte TV, "ce soir ou jamais" for France 3 etc... performing acoustic versions from her new songs but NOT tonight, it's a shame.
Anyway, we had a very interesting Questions & Answers starting at 5:45 pm ( 15 min in advance) that lasted 35 min+ with MC Valli ( blonde on the right) from France Inter radio.
The place is really packed, it's a thursday (?), lots of talking about the new album.

The important news is that MC5's Wayne Kramer who's on the album, will play with Marianne for her shows @ Théatre du Chatelet on March 22nd & 23rd. 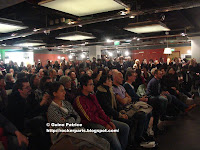 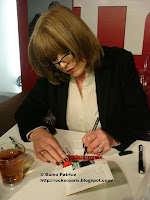 A full house for Marianne
Then she signed cds for people queuing asking for your name and always with a kind word.
She was delightfull.