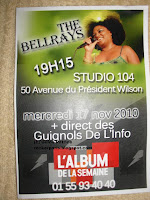 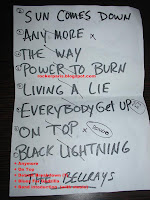 Back from famous Canal+ tv show L'Album de la Semaine in front of a small audience of a 100 people.
This time we have a real Rock'n Roll band with balls and everything...
The Bellrays have a new album out: "Black lightning" with the most horrible cover I have seen in a long time.Fortunately the album's fucking great.
They are here to play songs from the new album and only the new one, it started very nicely and quietly with two cool, groovy and soulfull songs ( "Sun comes down" & "Anymore") and then it's The Bellrays' tornado for the rest of the gig, Take-no-prisoners attitude , each song played one after another, no time to breath.
Pure rock'n roll from start to finish with soulfull vocals.
A short break and they're back to play, again, a couple of songs and extras " Detroit Breakdown" & " Blues for Godzilla".
One of the best gig we've seen these last few months, sound was neat and not too loud, heavy & groovy.
Perfect conditions.
After seeing this we are so disappointed. WHY ?
ROCKERPARIS won't be able to attend their show @ La Machine du Moulin Rouge in Pigalle on Nov 19 with Detroit 7 & Pussydelic.