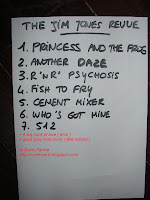 New english rock ' n roll band The Jim Jones Revue is playing for the first time famous french tv show "L' Album de la semaine " .
They are greasy & sleazy and really rocking , i mean reaalllly rocking.
Dressed up like 50's rockers, they're playing a heavy rock very 50's orientated
The singer is also playing the lead guitar and is screaming like a maniac. They have a piano that keeps their heavy rock swinging ( The Killer would be proud ).
Very nice set with 2 covers as an encore Elvis' " A big hunk of love" and Little Richard 's " Good golly miss Molly" just in case you didn't noticed who their influences were.
sorry no pictures for this one it's forbidden

Those bastards from White Lies were supposed to play a Black Session tonight on C'est Lenoir but cancelled it at the 11th hour. The singer was sick. What a surprise when i looked at the NME website the day after, the band is playing a free gig @ the HMV store in London.
He made a quick recovery.
http://www.nme.com/news/white-lies/42186
Publié par Angelo Misterioso à l'adresse 10:53:00 PM