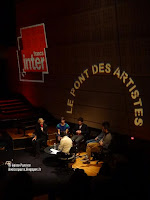 Radio show tonight @ Radio France with Belgium rock band Balthazar, french Rock band Baden Baden and jazz man Eric Truffaz.
Each band is playing a couple of songs one after another ( see setlist for details) between boring interviews as Eric Truffaz is the main artist tonight he's ending the show with 4 songs.
Balthazar is another very good pop-rock band from Belgium (with Deus and Zita Swoon) with some keys and violin to add extra flavor.
Baden Baden is french band  singing in English or french between Pop-Rock and "Chanson" depends on the language, I guess we prefer in English
Eric Truffaz doesn't need any introduction, some cool jazz on the trumpet ( we saw him last week at Studio SFR) once again with a girl on vocals for several songs, nice voice but songs are more pop when she's singing so we prefer when it's more jazz & instrumental.

Cool 150 min recording maybe they should cut out interviews between songs as it's a bit boring.