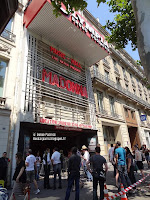 Madonna Special Club Show At Paris' Olympia To Be Streamed Live Via The Lovelive Youtube Channel This Thursday, July 26th

Glad we didn't go, she started the set @ 22:45, played two songs, started a 7 min speech, played one song then a 3 min interlude with video and 5 more songs , no goodbye.
45 min set (including the speech)... What a fucking joke !
Angry fans asked for refund, calling her a "Bitch" or screaming out "Shame on you". (video here)
This wasn't part of the live broadcast of course.

It seems that this last minute show @ Olympia was just a publicity stunt after the controversy with Marine Lepen but it felt flat as all the press this morning is only talking about angry fans insulting her.
It also looks like her fans are only cash cows to that bitch who's charging 260 euros for a 45 min set, even more awful: in order to get tickets with fan club members before the general public for this show you had to get a membership (20 euros).
Nice !


Angry fans at the end of the very short set: