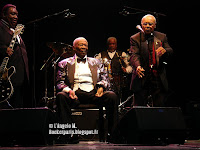 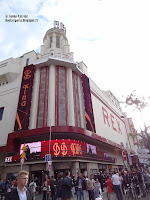 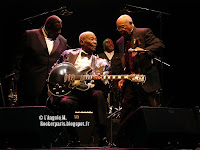 Still alive & kicking BB KING is touring at age 86.
He's coming to Paris (almost) every year, in 2011 he played the very same theatre ( on June 30), in 2009 it was @ Palais des Congres.
As usual the band is playing for 10 minutes without him then he enters the stage carefully with his entourage, he seats on a chair, puts on his guitar and there we go for a good hour with a legend. 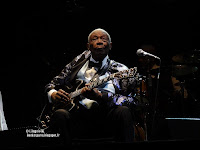 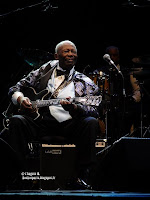 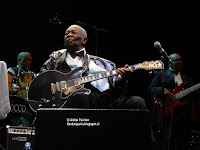 The guitar playing is very decent, much better than... Chuck Berry who's at almost the same age is absolutely awful.
There are still lots of talking between songs but tonight he played much more guitar than last time, as usual he's doing his funny faces while playing.
No new songs , just a Best of... with Thrill is gone (here on video) Rock me baby... 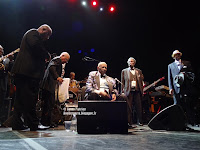 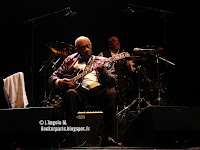 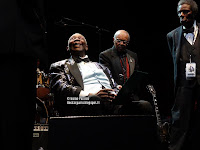 There's a 8 piece band to support him with a guitar player that is taking the lead a couple of times but Mr King is doing all the vocals with a strong voice and the guitar playing, once again, is neat.
After 60min+ his entourage is back on stage to help him giving out plectrums, badges... to the first rows, he's also signing a few autographs to fans.
He puts on his hat, is standing up and that's already the end.
Might be short but remember he's 86 years old.
I'd like to see Bruce Springsteen performing at his age. 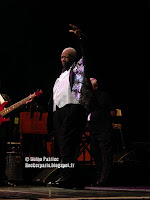 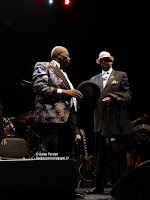 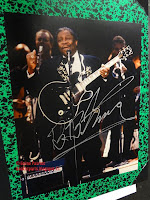 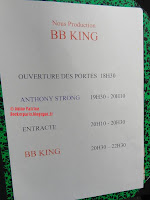