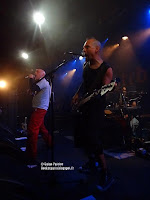 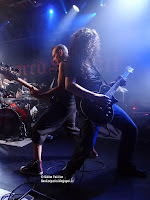 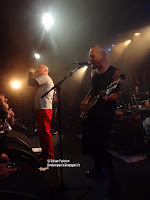 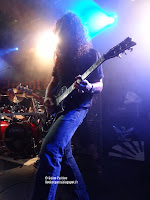 Classic heavy Rock metallers Armored saint is playing its first ever concert in Paris, France just a few days after playing the French Sonisphere in Metz.
The band formed at the beginning of the 80's disbanded in 1992 when John Bush left for Anthrax, the band is back together since 2008.
Small gathering of fans outside but when the band is taking the stage by storm it's quite full.
Classic line-up (John Bush , Phil Sandoval, Joey Vera, Gonzo Sandoval) with Jeff Duncan on guitars.
The band is happy to finally play in Paris and is rocking like maniacs on the the tiny stage.
The band never had the success they deserved, too bad they do have great Heavy Rock songs.
John's singing hasn't changed a bit, wonder how it would have sounded in Metallica.
The band is playing all the classics way back from their first ep, they're also playing a brand new song "Monkey" dedicated to a L.A. douchbag.
John's family: wife & kids are watching from the wings of the stage 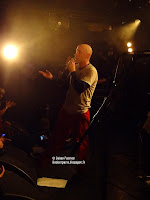 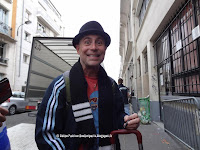 The Encore is epic with "Lesson well learned", on "Can U Deliver" & " Mad house" John is inviting his younger kid on stage to "play" some guitar (see video below). all in a very friendly and lively atmosphere.
great set 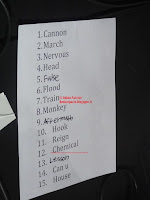 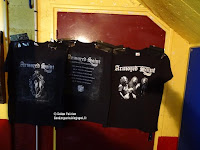 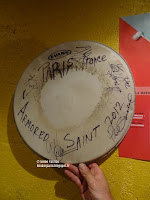 "Can U Deliver" with John's kid on -guitar-