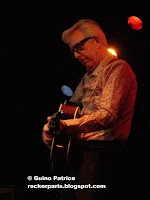 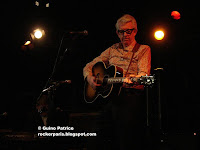 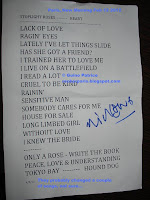 Not a lot of people on this sunday night at this famous Parisian Jazz club New Morning.
Once again you've missed one hell of a show.
We're not really familiar with his repertoire, we've just been told that we had to go as he's a great composer and...we were not disappointed.
It was a very relaxed and laid back concert with lots a great songs sounding between Buddy Holly, Johnny Cash & JJ Cale.
Conditions were perfect with tables and seats in front of the stage, a bit as if he was playing in our living room.
He started the show on his own on the acoustic guitar for a couple of songs, his band joined in for the rest of the gig.
Nice arrangements on each songs with subtle keyboards/piano and guitar with stand up bass for a warm sound. Vocals were superb.
Very classy gig.