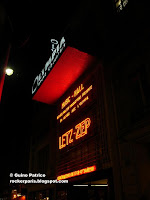 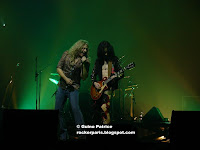 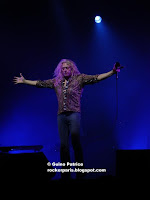 More and more cover bands are playing big venues, specially in England or in the USof A.
We don't really have this over here in France.
I mean who's willing to pay between 50 & 80 euros to see a cover band they could see for free in a bar ?
I guess a lot of people and I was quite shocked to see that the Olympia is full for Letz Zep, it's all seated but packed with 40 something old geezers.
Hard to believe that a cover band is filling up a 2000 capacity theatre in Paris. 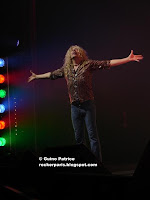 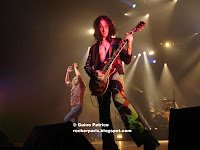 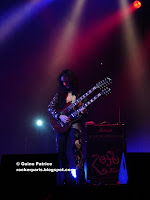 As tickets are very expensive I hope that it's worth every penny.
Great start with "Rock'n Roll", we're talking first league here... it's like seeing Led Zeppelin on stage, unbelievable, the singer looks like Robert Plant and sings like him, same for "Jimmy Page" & "John Paul Jones", only the drummer doesn't look like John Bonham at all.
The musicianship is high, the lightning is beautiful and the sound loud & clear.
All the songs are played perfectly with all the jams and medleys that Led Zeppelin used to do when they were performing.
The guitar player is terrific, nice look and the guitar playing is amazing.
Maybe the singer is sometimes a bit annoying trying to sing so high but he has all the famous stage moves.
They've played almost two hours over two sets with a intermission. Second set starting on acoustic with "Gallows pole" and a few more ...
Setlist was perfect: "D& C", "Stairway", "Kashmir"," baby I'm gonna leave you", "No quarter","Whole lotta love", ... 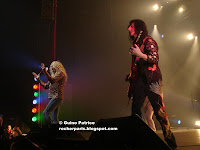 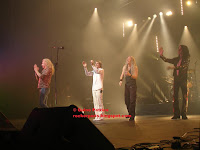 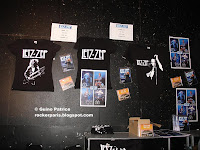 I never thought that it would be so good.
Great gig !