Updated Feb 20 2012: OZZY & Friends instead of Black Sabbath
unfortunately we were right about BS cancellation 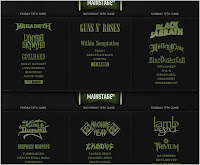 Not Sure about BLACK SABBATH as there are strong rumours that the whole Tour is canceled, It also may not be the ORIGINAL line-up if they are touring as Bill Ward seems to be booted out of the reunion, check his statement on his official site.
"Los Angeles, CA – February 2, 2012
Dear Sabbath Fans, Fellow Musicians and Interested Parties,
At this time, I would love nothing more than to be able to proceed with the Black Sabbath album and tour. However, I am unable to continue unless a “signable” contract is drawn up; a contract that reflects some dignity and respect toward me as an original member of the band. Last year, I worked diligently in good faith with Tony, Ozzy and Geezer. And on 11/11/11, again in good faith, I participated in the L.A. press conference. Several days ago, after nearly a year of trying to negotiate, another “unsignable” contract was handed to me."
Motley Crue will also play @ Zénith in Paris on June 18 2012 (not confirmed yet)