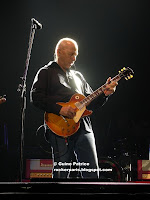 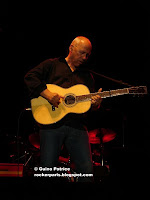 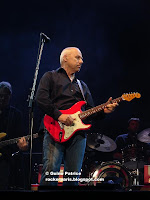 Bercy is Sold-out, even scalpers outside are looking for tickets, it's no surprise with this double bill: Both acts can play a sold out show in this arena.

Mark Knopfler is first on stage (@ 8:05pm) in front of an all seated audience, 7 musicians in all including Mark.
He's playing songs from his solo albums, we've never been fan of his celtic-country music, a bit too soft for us even though we like JJ Cale who's a major influence on Mark's work, you can tell by listening to his songs.
Good set by Mark Knopfler, songs are bit in slow motion specially for the most "celtic" songs.
The guitar playing is subtle and stunning.
He's probably one of the best guitar player we have seen on stage with Eric Clapton & Jeff Beck.
For the last couple of songs the very quiet audience is rushing down the front and the last one is welcome with open arms as it's a Dire Straits song "So far away" the only song we knew tonight.
He was on for 75 min ending @ 9:20 pm 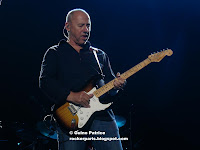 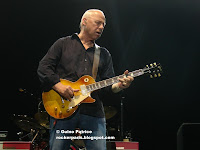 setlist Mark Knopfler: (tbc)
1) What It Is
2) Cleaning My Gun
3) Sailing to Philadelphia
4) Hill Farmer's Blues
5) Privateering
6) Song for Sonny Liston
7) Done With Bonaparte
8) A night summer long
9) Marbletown
10) Speedway at Nazareth
11) So Far Away 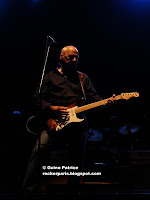 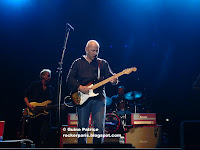 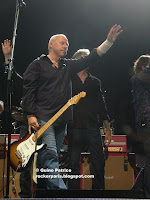 Twenty min + intermission before Bob Dylan to get the stage ready for the master.
People are trying to get down the front against the crash barrier but the tight security from Bercy is watching and everybody has to go back to their seat.Funny: lots of young fans and also lots of boring old farts who are not happy that people are standing up.
We have never seen Bob Dylan in such good form, of course the voice is still as horrible as ever but the legend played a few songs, not hidden behind the keyboards, center stage posing like Elvis Presley. He also smiled a lot.
For once the lightning was good.
A very good surprise AND tonight we can recognise the songs he's playing which is not always the case.
It's probably the best show I've seen him perform, compare to other bands it could be considered as crap but for Bob Dylan standard it was a good show. 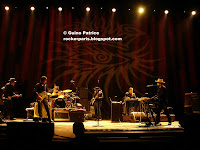 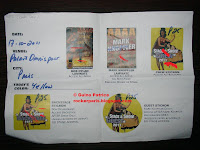 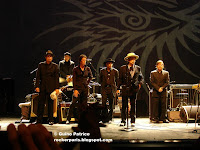