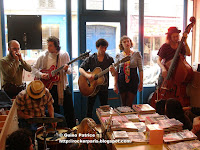 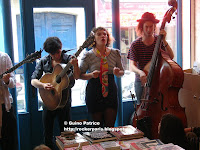 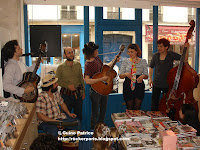 To promote the new album Moriarty is playing a showcase @ Fargo store in Paris.
We already saw them a few days ago @ Divan du Monde for a private gig.
It's a beautiful & sunny saturday, the atmosphere is realy cool and relaxed, the gig was kept secret to avoid a riot, just kidding ;-) so around 50 people but it's sold-out in the tiny shop.
Funny to attend a gig so early, the gig is starting at 12:40 and the band is playing their new song on acoustic.
The guys are not fooling around or joking or acting like buffoons (too much) like they did @ Divan du Monde even though the guitar player is still doing his funny moves à la Elvis once (that was enough).
In fact, new songs are pretty good when played more seriously.
The show lasted a good 40 min and 8 songs were played.
One of the guys from the band brought a huge Mozzarella cheese from Italy to share with people at the end of the show, really nice with tomatoes and olive oil and Fargo privided Fruit Juices and salami.
Wondeful to start a very long saturday for us in these conditions.

Then we went to the nearby open air secondhand market, where a friend of mine Miss F found an original small drawing and autograph of Jean Cocteau for just a few euros to a guy who didn't know what he was selling.
Couldn't fucking believe it ! 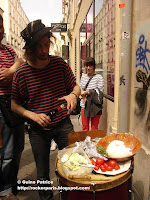 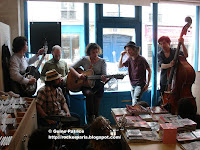 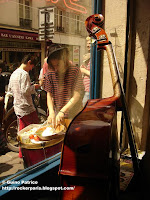 last song of the show: