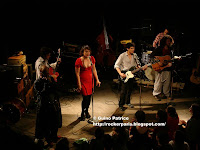 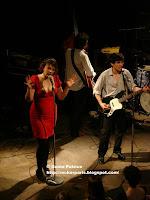 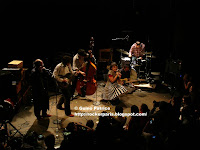 After playing a few sold-out shows @ Trianon last month ( 1200 capacity) Franco-American Folk-country band Moriarty is playing a private show for the Fnac Store in this 'newly' refurbished 500 capacity club: Le Divan du Monde.
Competition winners are downstairs and VIPs upstairs on the tiny balcony drinking free champagne and ... talking loudly.
We already saw the band a few years ago and we liked what we saw but it seems that the band has turned into a joke, first: most of the songs are crap and second: musicians are trying to act funny on stage which is fuckin' ridiculous.
Only the last 20 min minutes of the 65 min gig was good with some better songs at the end including a couple of their hits and acting more "seriously".
Oliver called this "Musique pour les ploucs" I guess he wasn't that far...
The show ended with a song they recorded specially for the "Record Store Day" and here on video.
The only one problem was, once again these VIP dickheads upstairs that didn't stop talking loudly for the whole set. (Patrice, our photographer was there but I guess he didn't talk as he was probably so bored...)