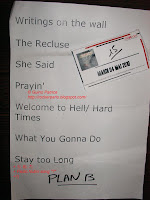 English artist Plan B is promoting new album " The Defamation of Strickland Bank" @ famous canal+ tv show L' Album de la Semaine.
I don't know anything about this artist apart that he's just been N°1 in England.
Might worth checking what he's doing.

5 musicians ( 2 guitars, bass , drums, Keyboards) and 3 girls on backing vocals.
Ben , the singer has a high voice like Smokey Robinson.

Mixing Motown & English soul with a very modern sound à la Eminem and a bit of Rock music too, this can't be bad and ...it is very good indeed.
Musicians are quite young but everything is perfect even though they had to re-do a few songs.
We were lucky to get one more extra song: a Paolo Nutini song that was hardly recognizable.
Lots of very cool and soft songs with a groove maybe they should had some real brass instead of having them played on the keyboards, and few rocky tunes at the end.
The singer's rapping on a couple of songs but not too much ( I Hate Rap music).

Hard to believe we were less than a hundred people tonight watching this killer set as these guys are N° 1 in UK.
I've been told that their show yesterday @ Maroquinerie was cancelled because of poor sales.(?!?)
Publié par Angelo Misterioso à l'adresse 11:27:00 PM