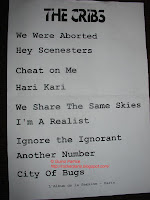 The Cribs are doing very well in England as their new record went to N°6 in the charts for its first week.
They're playing the Nouveau Casino tomorrow.
I've never heard anything so I don't know what to expect.
Well it's a typical english indie-pop-rock band , nothing special.
Funny they're dressed like a american college-radio band with converse ,lousy t-shirt and torn up jeans. The bass player is dressed like Kurt Cobain.
Amazing how Noel Gallagher is a Johnny Marr lookalike, same haircut and face.
The gig was ok , no more.
Publié par Angelo Misterioso à l'adresse 6:49:00 PM