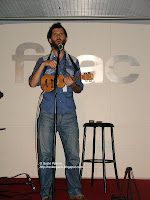 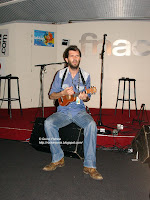 To promote Solidays' Festival next week-end in Paris ( all the money is going to fight AIDS, click on link for full line-up ), 3 artists were invited to play a free acoustic show at the Fnac store in Les Halles.
First on stage @ 4: 00 pm is English singer-songwritter Hugh Coltman , who is now leaving in Paris ( and is fluent in French ).
I knew his name but never heard anything before today , quite a surprise , a very good surprise should I say.
This lad 's got talent , his songs are really emotional and he has an amazing voice . If you can put your hands on one of his cds take it and put it next to Jeff Buckley's cds.
Great ! 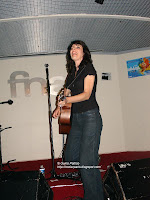 Then we had La Grande Sophie , she used to play in an "alternative" French band but she's doing a solo career and is very successfull thanks to a couple of catchy single.
She's now playing some French pop-rock variétés ( she did a duet a few years ago with Lee Hazlewood ).
She's good looking and very tall ( in English " the tall Sophie " ) , the music is nice but too much 'french variété' for me. Maybe that's because she's singing in French.
She seems very nice always smiling and interacting with the audience.

Both artists played 5-6 songs for a 30 min+ set.
The Wampas were next but I had to leave to go to see Madness playing a private show at 6:00 pm @ Ciné Aqua next to the Eiffel Tower.
Publié par Angelo Misterioso à l'adresse 12:34:00 AM