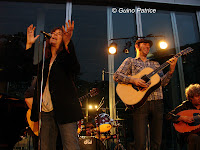 Patti Smith is playing for the 3rd time @ Fondation Cartier in Paris.
The first one was acoustic solo with interaction with the audience as she talked a lot with the small crowd .
2nd one was 2 weeks ago ( Jun 7th ) with full band even if they played acoustic it was rockin' .
For her last performance here , the weather's nice so the Fondation Cartier has set the stage in the garden ( 500 extra tickets were sold at 5 pm on the day ). VIPs included Rachid Taha and singer from french band Tarmac.

Patti requested people in the front to sit down so the atmosphere is laid back and bucholic.
Patti's playing with her children Jackson on guitar and Jesse on piano ; Michael Campbell is on drums for a few songs plus a french guitar player .

She's telling the audience how much she enjoyed being in Paris for the last 3 months and she thanked generously the people working for the Fondation and how much her exhibition is a achievement in her 40 years career .

There's no pre-established setlist so between songs patti 's wondering which song they 'd played next .
The set is basically the same as last show : a best of. ( "Pissing in the river" Neil young's " Helpless"... )
Cool at the beginning with only Jackson on guitar and then more rock.
The atmosphere is sooo laid back that so some songs are really under-rehearsed especially Nirvana's "Smells like teen spirit " she didn't remember the lyrics nor when to sing but she took it with a laugh under the wings of her musical director for tonight's show : Her son Jackson .
Concert ended with a rockin' version of them's Gloria and Finale "People have the Power" . 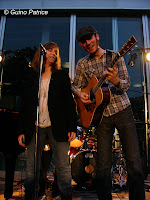 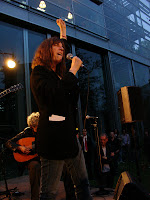 "People have the Power" :