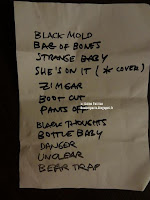 
After playing many shows with Heavy Trash, John Spencer is promoting a new Blues Explosion album "Meat + Bone". As usual at the Album de la Semaine conditions are perfect for the 120 people  to attend the gig.
Stage is simple Russell Simins on his small drum kit dead center with Judah Bauer on the left & John Spencer on the right and a few amps behind them.
You can see who's the "star" in the band as John Spencer is wearing some leather pants , make-up and had his hair done.
The music hasn't changed it's a mix of bluesy-garage -rock , the new songs are less deconstructed than before but if you're not familiar with the band it's hard to get into it straight away.
The end of the 50 min+ set is epic with John Spencer inviting everyone on the stage for the finale after going a couple of times himself in the stalls to shake a few hands with the audience.

Bobby Womack will play the very same place on Sept 27 and next will be French band Mass Hysteria.