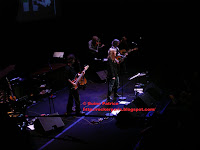 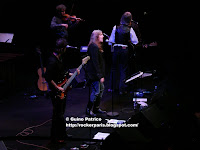 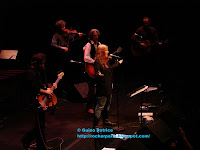 First gig out of four for Patti Smith in Paris, tonight it's an evening of Poetry & Music celebrating the life of Robert Mapplethorpe.

She will play on Jan 20 another concert @ Cité de la Musique this time it will be "Unplugged dreams" I guess it will be a Best Of set.
Two more shows will be played @ Salle Pleyel, first one with Philip Glass for a tribute to Allen Ginsberg on Jan 21, second one she will play "Horses" on Jan 22.

We didn't really know what to expect tonight and we were a bit scared when she went on stage and started reading her book. Her daughter is on piano and a guy on xylophone. Luckily it didn't last too long and she welcomed her musicians to play some songs starting with a cover of Tim Buckley because Robert loved it, she then played a couple of her songs.
We had some more reading but she always kept it short and put a little passion into it, not like... Lou Reed who was plain boring when he was reading his shit a couple of years ago @ 104 or @ Colette.
She had a standing ovation for "Dancing Barefoot" and the encore "Because the night".
One of the first time i'm not using my earplugs, it wasn't too loud and the sound was crystal clear.
She didn't play the second song of the Encore (" Little Wing" ?) and even though people kept yelling for more she didn't come back.
She could have done a bit more as it was a very short set , we were out by 9:20 Pm ( Start 8:00) and she was already signing books and albums in the lobby, it didn't last long either, no more than ten minutes.
Enjoyable evening but she kept it to the "Minimum Syndical" as froggies are saying. 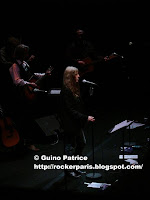 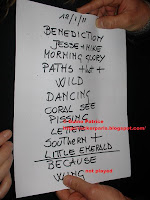 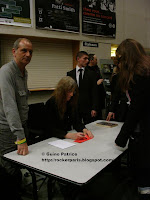