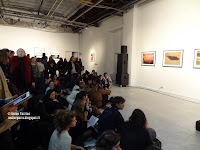 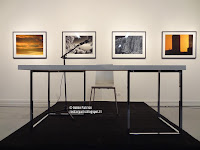 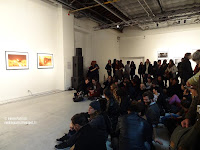 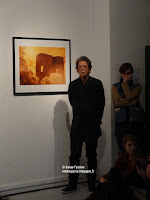 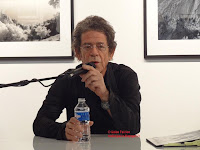 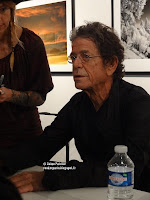 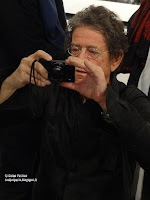 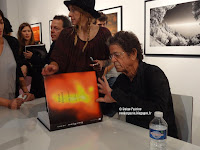 To present his new book Rhymes/Rimes

Very late opening as Lou Reed worked on the Exhibition, starting in the morning then he had some interviews so he needed a rest. It was supposed to start at 7:00pm in fact Lou Reed showed up at 8:30pm.
They contacted the Palais de Tokyo just 3 weeks ago for this exhibition, it really shows that they have a huge space and really don't know what to do with it. We've been a few times at recent exhibitions at the Palais de Tokyo and we have to say that we haven't seen so many crap exhibitions in such a short amount of time excluding Lou Reed's pictures, most of them are pretty good even though the man doesn't want to "legend" any of them.

It started with a "lecture" of RAVEN but first Mr Grumpy asked people in the back to "SHUT UP".
It lasted for 20 min.
Then there was a Q&A for another 20 min: There are pictures dating back from the late 60's, no photoshop, he has several cameras, all the pictures in the book are in a certain order... ans so on.
and Lou signed his new book "Rhymes/Rimes.
The Palais de Tokyo knows how to spend our money so we had a nice reception afterwards with champagne and canapés/macarons.
Cool evening !