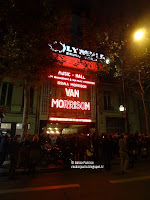 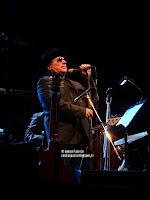 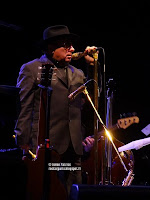 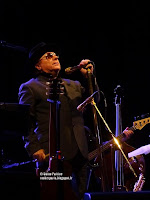 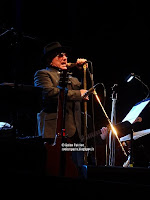 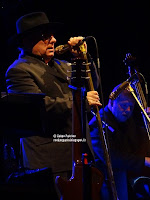 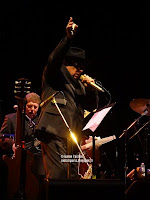 Once again tickets are ridiculously expensive, up to 220 euros for the best seats. WHAT THE FUCK ?!?
It's quite full tonight but not sold-out with people in their forties and fifties. Hard to afford a gig at such silly prices when you're a student.
Anyway... the opening band is Shana Morrison, I guess it's his daughter or his wife, nice voice but the music she's playing is an easy-listening-country-folk of no interest at all.

Then we have Van The Man standing in the middle of the stage among his musicians -guitar, bass, keys, several brass players & drums- with his trademark black hat & sunglasses.
He has two beautiful guitars just next to him that will be useless as he won't even have a look at them for the whole set.
He's singing , of course, perfectly playing a bit of saxophone from time to time, a bit of harp too, a couple of songs are played on the piano.
The sound is not too loud and as perfect as his voice or the musicianship of his band, fantastic bass sound, warm as I like it.
Lots of very relax and cool songs maybe a bit too many for my taste with some great covers "Fever" "Baby please don't go".
Unfortunately only one song from "Moondance" my favorite record, the title track.
Lots of classics. setlist included: "Moondance", "Brown eyed girl", "baby please don't go, "fever", "Gloria", "whenever god shines", "enlightenment", "here comes the night"...
great set too bad there wasn't any encore at the end.