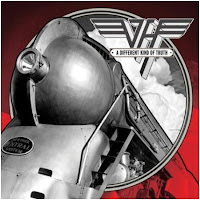 Well... They've played a 'new song' @ Café Wha? called "She 's the woman" that is in fact a song they recorded as a demo in 1976 and NOW the new single "Tattoo" sounds like a song they never recorded but that they were playing in 1977 called "Down in Flames" .
It look like Sammy hagar was right when he told Rolling Stone Mag that "they didn't actually write new songs. They took old stuff from previous sessions, I mean stuff from before I even joined the band"

For more info and the new album and their concert @ Café Wha? go HERE