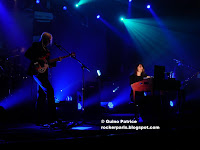 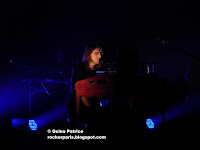 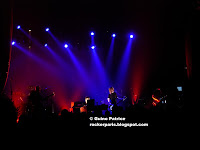 Lead singer from Porcupine Tree is playing a solo show, the balcony is full but lots of empty spaces in the pit downstairs.
The stage is hidden behind a very thin white veil on which is screen some home movies.
The gig is starting on time but with the worst way possible: musicians are getting on stage one by one with drummer first.
Have you ever seen a rock concert starting with a (small) drum solo ? We did tonight.
First song is a jazz rock instrumental... humm well...
Then we have some proper songs if we can say that.
After a few songs the white veil is down and the projections are now on the backdrop.
The Music ? A kind of heavy rock version of the Pink Floyd with some jazz rock thrown in. 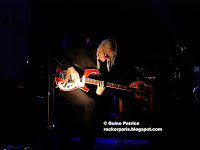 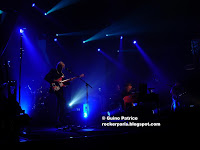 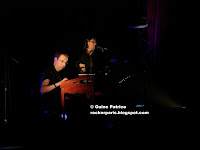 We don't know any of the songs played tonight as we only have a couple of Porcupine Tree albums but we liked what we heard.
Technically it's perfect, Steven is really into his music for the whole set playing keyboard or guitar and of course singing.
The show ended with a 20 min song from the new album.
If you're really into that kind of music it was probably a fantastic if you don't know any of the songs it's more difficult to get into it, even though it was a good show, a 100 min was enough for us and the end of the show was welcomed.
The audience kept asking for more so Steven went back on stage just to say that they've played everything and thanked the audience.

The Management of Steven Wilson is erasing all videos from YouTube but we've been sent these links to videos from Paris'Bataclan. ENJOY !

Thanks to Live Video Bootlegs for all the videos
Publié par Angelo Misterioso à l'adresse 11:05:00 PM