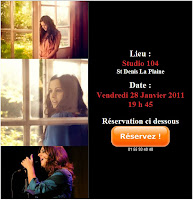 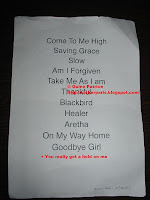 English female singer Rumer is playing tonight @ L'Album de la Semaine for Canal+ with her band ( 7 musicians & 2 girls on backing vocals) to promote her debut album "Seasons of my soul".
I was a bit afraid after the first song which was very soft and I said to myself "Fuck Here's the new Norah Jones" Well one is enough , we don't need another she's so boring.
In fact No the second song is more up-tempo , Rumer is playing typical English 60's pop with a bit of soul & jazz, a modern version of PP Arnold, Liza Strike or Dionne Warwick before she turned into a disco queen.
He softer songs are a bit too soft for us but the rest sounds really great.
She ended her set with Smokey Robinson's " you really got a hold on me".
Publié par Angelo Misterioso à l'adresse 5:55:00 PM