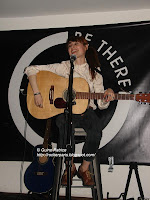 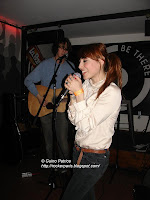 "Pint size" Anto Dust is playing the Be There a small bar on the Ile St Louis in the heart of Paris.
She has been linked to The Babyshambles as she's good friend with Drew and last time she played at The Motel in Paris Peter Doherty came for a couple of songs with her.
There's a young English guy: Dan Pickard opening. 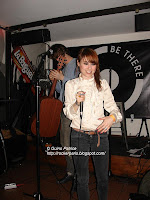 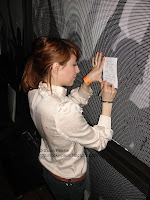 Not too many people even though there were rumours that Pete might turn up. ( Well we left at 10:30 he wasn't there, he might have come later)
Incredible how lively she is, always smiling and telling jokes between songs , you can see she's really enjoying playing her songs.
She has a very tiny high voice.
First part of her set she's on the guitar, for the second part she's only on vocals leaving the guitar to her friend Dan Pickard for the better as she's much more confortable without playing.
As you can see she is very cute and seems to be very friendly.
She'll be singing@ Pop'in on April 27th and Truskel on 28th.
Publié par Angelo Misterioso à l'adresse 11:30:00 PM