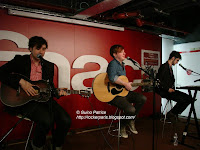 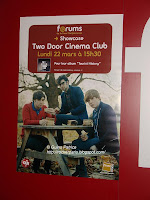 Another free gig, just the time to take the tube from La Défense, where we saw Noah & The Whale + Fink ( scoll down for review), to Montparnasse to see Irish youngsters Two Door Cinema Club.
Lots of young girls for this one, around 60-70 people., The band is one time and you could'nt be late for this (very) short gig as they've only played 4 songs for a mere 12 minutes. 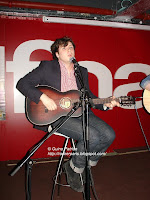 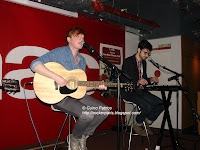 Hard to judge when you've never heard a band before and when it is acoustic , it's even more difficult as on cd they're a bit electro-pop à la Vampire weekend.
Listening to the album afterwards it's really not my cup of tea but the set was good.
The guys stayed after their "gig" to meet the girls and take Pics with them. 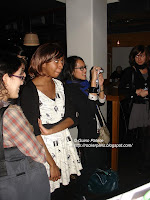 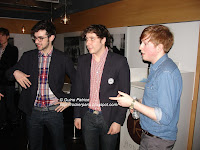 It was their first showcase in Paris ever and they are opening for French band Phoenix in a sold out Olympia tonight.