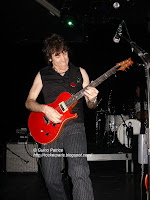 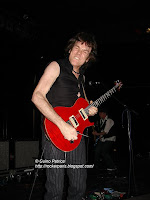 Pat McManus is headlining this blues rock night @ Trabendo, Eric Bell Trio and Taste have just played before ( scroll down for review).
Different style for Pat, the blues is left aside for a moment and the beginning of the set is more Hard-rock, 80's style with lots of guitar demonstration.
Remember his surname is The Professor.
Pat is probably a great fan of Gary Moore , he's doing the same funny faces when he's playing.
Fortunately things calm down a bit ( it was getting annoying after a few songs) when Pat is playing the fiddle or the acoustic guitar. 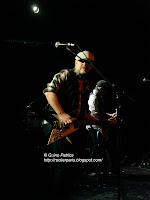 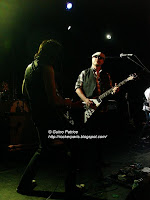 It's an Irish night so we had a few covers : Thin Lizzy's "Black Rose", Rory Gallagher's "Out on the western plain" and... NO U2 cover. 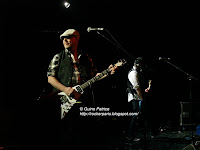 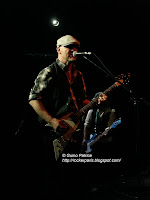 Andy Powell from Wishbone Ash is introduced , then things are getting reaaaalllly serious, Wishbone Ash songs were played ( see setlist fro songs) , very cool attitude from Andy Powell with his sunglasses and hat.
Unfortunately as the show was runny very late we couldn't get any encore.
The musicians came straight to the merchandising table to sign stuff for fans.
And once again as Patrice Guino told me after the gig the light engineer should be dismembered alive and the pieces thrown to feed some pigs as Pat McManus played the whole gig almost in complete darkness. 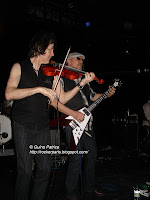 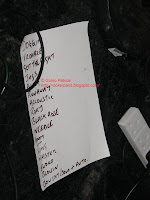 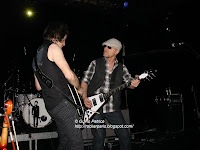 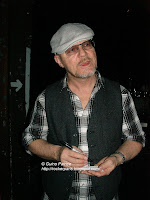