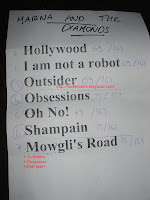 setlist
Sometimes when we go to this famous Canal+ tv show where bands are playing a short set of their new album (& a few oldies ) , when it's a new band we don't know, we don't listen to it before to get a surprise.
With Marina & the Diamonds, we've been told it was 80's orientated but we've never thought it would be that shitty.
I mean this is the worst of the 80's; keyboards, no guitars, the singer Marina is really good looking and has a nice voice with Kate Bush's tone of voice ( or Klaus Nomi) but the music sucks so bad.
Even Marina's stage moves are typical from those 80's bands that we hated so much back then.
This band looks like a band that was put together by a lousy record cie trying to surf on the 80's revival.
Bollocks.
I's unbelievable that she's topping the NME charts for the last 4 weeks, maybe they took too much ecstasy when they were clubbing in Madchester a few years ago.