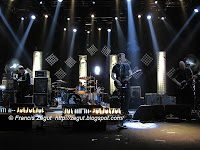 Rehearsals by Francis Zégut ( check his website for more )

Well well well, lots of expectations for this private gig @ Canal+ .
We get there early as we were to attend the soundcheck @ 5:00 PM.
Met a couple of friends and made our way into the tiny studio ( capacity for tonight 250 people ) Patrice Guino , our photographer couldn't take any pictures because of one bitch from Sony Music France. Too bad. this fuckin' bitch had nothing better to do !!!
Anyway the band jam a bit , had fun for more than 30 min , then they did an interview but people were asked to leave the premises just before. 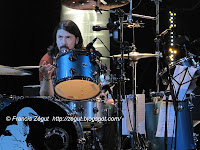 Dave by Francis Zégut ( Thanks man )

We were told that the band was playing a proper set , which means playing 90 min.
Most of the tickets have been booked by Sony Music France for the Press & relatives but there were a few fans including the two maniacs behind me who headbanged for the whole set.

The record is OK, I thought that their show at the Rock en Seine Festival last August was kickin' ass (click for GREAT pics & Video from the set ).
Seeing them in such conditions was perfect , once again in this studio.
Songs on records are just Ok but LIVE they're masterpieces ( well, apart from a couple ).
Dave Grohl is a fucking KILLING MACHINE !!! Smiling all the time to John Paul Jones.
He's like a kid in a candy store.
Funny to see John Paul Jones playing with those guys , funny to see him asking Josh Homme for a short break between two songs as Josh was introducing the next one as they've barely finished the previous.
Josh Homme was as cool as ever, he was the only one ( with Alain ) to stop to sign autographs to fans on his way in.
Alain Johannes was also very nice , he's fluent in french and is playing bass, guitar & keyboards for the band.
They've played a new song and Josh told us that they have plenty more.
A second record in the can ? 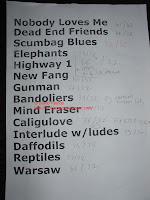