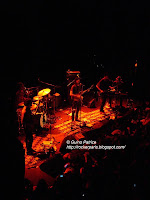 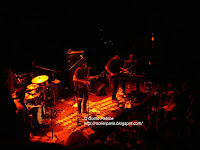 La Cigale is Sold-out, we get there early and we couldn't find a seat at the balcony ( Well Patrice could secure one ).
Just in time for the support artist , a folk singer on his own, all dressed in white with projections all over his white suit: nice effects but the music is soooo boring.
I mean really boring

But nothing could prepare us to the Devendra Banhart performance.
He played the whole set with only red lights on him and almost completely in the dark.
First song was ok but after this ....
Probably the most boring show I have been to this year so far.
Songs are lame and so ssssslow ( I should write zzzzzzzlow ).
He played with his band for the first 5-6 songs then solo on acoustic guitar ( with a Johnny Thunders ' cover " You can't put your arms around a memory" ) or keyboard , later the band joined him back for some more very boring songs.
I almost gave up when he took the bass and the bass player took the mic to sing one.
Fortunately the last 5 songs were quite heavy with some nice heavy guitars.

One of our worst show this year , sssso bad after the gig of Them Crooked Vultures @ Canal+. 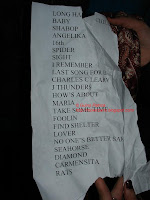 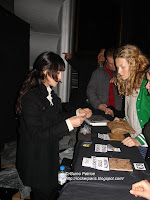