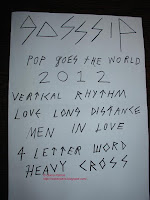 Gossip are doing famous Canal+ tv show " L' Album de la Semaine" , they are here to promote their new album .
They've played yesterday a long sold-out gig @ Boule Noire.
In front of a selected audience of less than 200 people , Beth Ditto are friends are only playing songs from their new cd ( see setlist ).
They used to be more rock , it seems that new songs are much more orientated with a 80's sound with weird keyboard and all... not for the best.
Beth still has a voice but the music is less interesting, too bad .
The gig was quite short , around 30 min and Beth came to sing the last one in the stalls with the audience.
Hey guys come back to some real rock'n roll.
( sorry no pictures it's forbidden )

Then I 'll go to Bercy for the Chris Cornell / Lenny Kravitz concert.