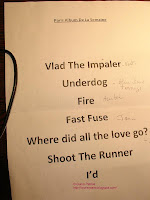 After seeing the Plastic Heroes at the Gibert Joseph store in St Michel we headed north to the shitty Plaine St Denis to see Kasabian playing new songs in front of a selected audience of less then 200 for the Canal+ tv show "L' Album de la semaine".
First time i saw Kasabian I was very impressed it was at the Rock en Seine festival and I didn't know anything about them at all.
Today they're promoting their brand new cd ( they were yesterday at the Trabendo club ) so they're playing mostly new songs.
Usually bands playing live are much more better than on cd but I tonight I thought that Kasabian are much more powerful on cd than live.
There's something missing, maybe more guitars or more backing Vocals.
Even " Shoot the runner" was weak.
So it was good show but it could have been better.
I Guess it's a band you have to see in a festival when 30 000 people are singing along to their songs.
Publié par Angelo Misterioso à l'adresse 1:28:00 AM