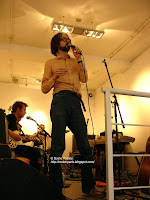 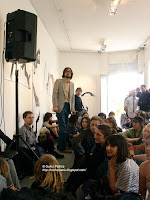 Jarvis rocking & checking the sound for the Poetry

The first two songs played were : " I never said that I was deep" and " I told you that i love you " then the band jammed , played " hold still " , "leftovers " and " further complications " ( not in this order )

Improvisation with part of the band ( the rest was out to lunch ) then Anthony Hadden - Guest came to read 4 poems including one with Jarvis on drums.
The last one (here on video) is sounding a bit like a Lou Reed song. Cool
The band played " Homewrecker ", "pilchard" , " Slush" and " Fucking song" all of them twice

another break
Jarvis & band played a 10 min version of " i don't want to loose you again".
Then it was time for people to bring their instrument and play:
1st one was a 10 year old kid playing guitar
2nd was a teenage girl on acoustic guitar and a kid on trumpet
3rd was a guitar player and sitar player
All of this with Jarvis playing Keyboard.

Jarvis left to go out only to come back 20 min later to announced that it was over for today in between we had a ridiculous Pete doherty inpersonator and his girlfriend on guitar without the band, and a couple of other guys who jammed with the band. 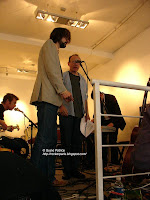 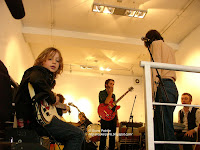 Guest on poetry and kid on guitar

Busy day , the place was packed , lots of jamming with people ( see pics ) but not as good as yesterday maybe because there were too many people and without the "yoga class" or the "Kids class" there was something missing. These classes were also great to relax outside.
People were not into it as much as the other days, talking while the band was playing, sad.
I guess that saturday will be very busy too 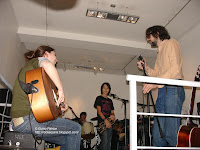 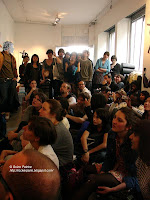 Young guests and the overcrowded galerie

A little bit of Poetry with Anthony Haden-Guest: