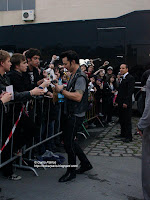 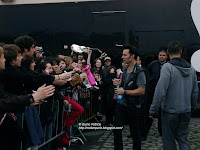 After a week with former Brit-pop lead singer of Pulp : Jarvis Cocker .
It's time for some American Punk-Rock with Green Day.
They called this Punk but it ain't Punk at all for me , Green Day is more a powerfull pop band than anything else.
I made my way into the tiny studio that holds 200 people while the band was already playing their first song , the show had started earlier than usual.
The sound is crystal clear , it's unbelievable , absolutely perfect.
Many years ago they were 3 on stage now there's an additional guitar player and a keyboard-guitar player.
The set didn't last too long they're here to perform some of their new songs ( including the new single ) plus a couple of oldies including " American Idiot".
The band is on top form it's almost too perfect ( for a Punk band LOL ).
Lots of teenage girls in the audience , they even had their 15 min of fame as the singer asked 30 of them to come on stage a couple of times.
It's the first time ever that i'm seeing so much security between the stage ( well it's not really a stage as people are seating in stalls and the band is playing on the floor ) and the audience at L' Album de la semaine.
Are these guys afraid of something ?
Anyway ...Really nice 40 min + gig.
After the show only the bassist came to sign a couple of things to fans outside , the others went straight into their limousine.
Call it Punk ? 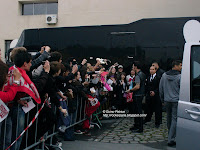 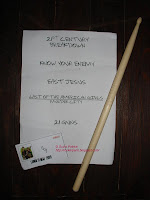