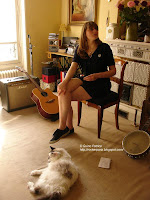 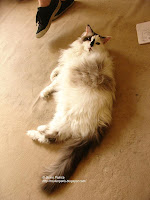 Erica & the family cat relaxing to her music

Just read what the Blogotheque is saying about her HERE ( sorry in french ). 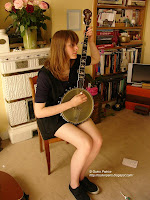 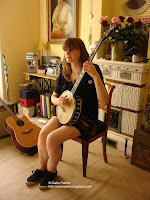 Once again Oliver is bringing the best of the new Folk scene ( I Hope she won't mind if I call her music: Folk )
Charming young lady , beautiful voice , playing both guitar and banjo ( though not at the same time ;-).
Erica gaves us a emotional concert with her songs and a couple of covers, one by Elliott Smith and a surprising song by french artist Marie Laforet sung in French ; but the best is to see and hear by yourself by watching the video below : Isn't she nice ?
Things were really relax after the show with a couple of glasses of French Rosé. Won't mention any names.
We ended the evening with some al dente spicy spaghetti.
A sunday that felt like going to the countryside for the weekend.
When 's the next session ?

A video HERE with Erica on Banjo 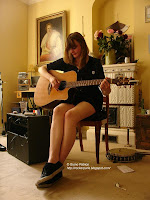 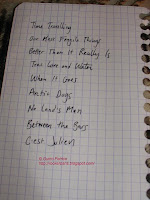