Red Piano tour stops in Paris Bercy tonight .
Tickets once again are VERY expensive going up to 190 Euros .
It may not be sold -out but it's hard to find an empty seat even though there are huge gaps between blocks in the pit.. Around 12000 people here as it's an all seated concert . 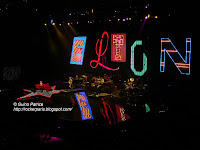 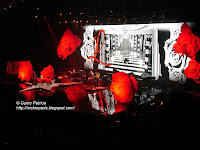 In case no one remembers his name

Stage set is absolutely georgous, see all those beautiful " Tableaux "created by David La Chapelle.
Show started smoothly with a VERY slow version of " Bernie & the jets " and then i though well , this is gonna boring, Elton on piano , not much guitar , lots of keyboards. Sound is perfect.
A couple of mid-tempo songs. i'm about to sleep.
But then slowly you start getting into it, i may have only one of his records but going to an Elton John gig is like going to see Queen , Supertramp, or U2 . You don't have any cd at home but you know all the songs as tonight Elton is playing all his big hits mainly oldies.
For each song there's something going on on the stage , some inflatable or films on the HUGE screen in the back ( one of the biggest i've ever seen in Bercy ). Justin timberlake is impersonating Elton on " Rocket man " . Lots of dancers on the movies which are all very GAY , even the cops are played by Village People type guys .
Musicians are funny with their silly haicut and ridiculous stage clothes. 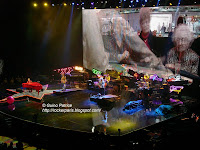 The Who's " Pinball Wizard"

Most of the movies are NOT politically correct with lots of tits and some are very suggestives which is a good thing. FUCK censorship .
By the time he's playing The Who' s " Pinball wizard " everybody's standing up rocking.
Elton makes the effort to speak french between songs and thanks the crowd many times. 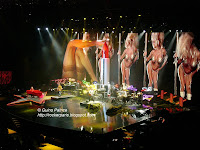 Pamela Anderson's dancing on " the Bich's back " 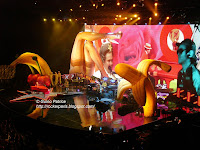 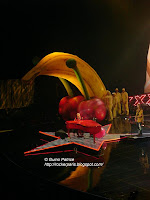 Nice ending with 50 people getting on the stage around the red piano for " saturday night ... " 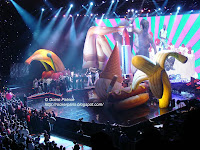 " Saturday night 's all right for fighting " with stage invasion

SETLIST :
Bennie & the jets , Philadelphia freedom , Believe , Daniel , Rocket Man , I guess that's why they call it the Blues , someone saved my life tonight , Goodbye yellow brick road , Sorry seems to be the hardest word , Tiny dancer + musician intro , Don't let the sun go down on me, Candle in the wind , - Break- pinball wizard, bitch' s back , i'm still standing , saturday's night... Encore : song for you . ( "Philadelphia freedom" was played so it is 2) or 6) )

Never thought i would say that but, after a difficult start, the show was just great.
This gig was broadcasted live around France and Europe in cinemas.
Publié par Angelo Misterioso à l'adresse 11:41:00 PM