Adam Ficek drummer for The Babyshambles is playing in this tiny bar next to the hotel France Albion where Pete Doherty used to come . 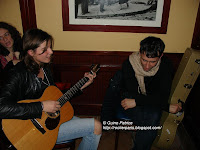 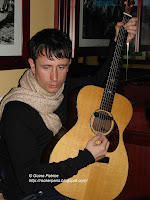 Very relax atmosphere , a bit like going into a bar to hear one of your mate playing the guitar for fun. Arrived there around 10 PM , he was already playing. Can't really tell you every song he played while i was there ( a couple of hours ) but he definitely did some of his songs ( he's got a solo record out ) and some Babyshambles ' .
A couple of guys ( and a girl : see picture ) played guitar with him with singalong from the 20+ crowd that gathered to hear him play.
Nice way to end the night with Adam who's one of the nicest lad i have ever met.
And he's got class : have a look at the way he put his scarf around his neck on the right picture above .
He should be French ;-)

Check his Myspace to hear some of his songs :
http://profile.myspace.com/index.cfm?fuseaction=user.viewprofile&friendid=281053977