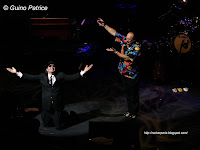 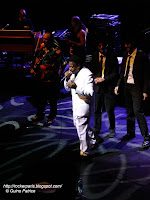 
The Original Blues Brothers Band back at the Olympia. the first time Steve Cropper played there was more than 40 years ago in 1967 with Booker T and the MG's , Carla thomas , Sam & Dave , Eddie Floyd and Otis Redding all on the same bill for 2 shows at the Olympia .
This time only Eddie Floyd remains from this line -up .
The gig started very slowly with 2 instrumentals : Booker T's " Green Onions " and the " Peter Gunn theme" from the Blues Brothers original soundtrack .
The show really started when the new 'Brother' Jake came on stage and started singing ; from then on it was Hits after Hits : " She cought the Katy" , "Sweat home Chicago " , " Minnie the Moocher"...
Don't know why they call themselves "The Original BBB " when there are only 3 members from the original band Steve plus 2 of the brass players , they are more like a cover band anyway ...
Things started to get hot when Eddie " Mr Knock on Wood" Floyd was introduced for the second part of the show dressed in a shiny white costume.
Some Jake & Elwood clones from the audience were asked to join for a wonderful rendition of Sam & Dave's "Soul Man "
Show ended with " everybody needs somebody to love " and Steve Winwood's " Gimme some lovin " .
Fun show !!!