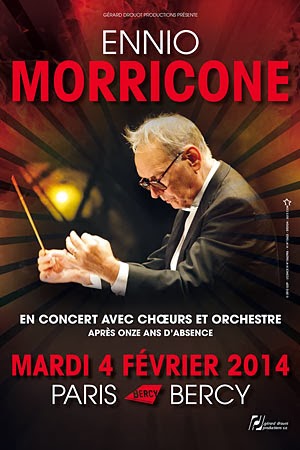 So...Legendary Ennio Morricone is in town, it's been a while.
Last time he played in Paris was @ Palais des Congrès 11 years ago, backstage he was given the medal of the city of Paris.
Tonight he's playing a much bigger hall, we're @ the 13000 capacity (all seated) arena : Bercy and believe or not: it's sold-out with prices ranging from 45 euros (just a few) to 150 euros.

We have very nice seats in the stalls on the right but as Ennio is playing (read : conducting) facing the orchestra, we went to sit down behind the stage on the right side on what is supposed to be the worst seats which are in fact the best tonight as we're facing Ennio Morricone.

First there is a long introduction, an interview with The Master that is shown on the screens on each side of the stage , subtitled in French as The Master only speaks italian.
The short movie is quite long ( 5 min+) so the audience is starting booing but when Ennio is walking up the stairs to the stage , he's welcomed like a proper Rock Star but it doesn't seem to distract him at all.
I've never seen so many people on a stage: 86 piece orchestra and 75 voice choir.
We're getting treated to a Best of  with many famous soundtracks:

-Ist part of the concert with "Le clan des Siciliens", and the most famous parts of Sergio Leone's Western movies & "Once upon the time in America" plus a few others.
It's powerful

There is a 20 minute intermission
-Then second part with "Le professionnel"," Cinema Paradiso" and "La Bataille D'Alger" "The Mission" and many others

There is an encore with another version of The Good The Bad The Ugly's "Ecstacy of Gold" performed for the second time tonight to rousing applause.
Quite Amazing.

setlist: (from BERCY OFFl)
-The Untouchables
-Deborah's Theme
-Poverty
-Once upon a time in America
-The legend of'900
-H2S
-The sicilian clan
-Love Circle
-Croce d'Amore
-Come Maddalena
-The good, the bad and the ugly (title)
-Once upon a time in the west
-A fistful of dynamite
-The Ecstasy of the gold
-Chi Mai
-Cinema Paradisio
-The battle of Algiers
-Investigation on a citizen above suspicion
-Sostiene Pereira
-La classe operai va in paradiso
-Casualities of War
-Abolisson
-Il deserto dei tartari
-Riccardo III
-Gabriel's Oboe
-Falls
-On earth as it is on heaven
---Encores (rappel) ----
Here's to you (Sacco e Vanzetti)
Leone - Final part
Mission - Final Part
+
The Ecstasy of the gold (2)