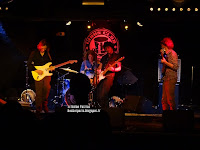 Back at the Gibus club for a charity gig organized by two associations ‘Glowbule, vivre avec le cancer’, & ‘Joie d’un sourire’ to help children with cancer at hospital.
We're here to attend John Mitchell Fleet's gig. We already saw its leader opening for Peter Doherty @ Bus Palladium a few weeks ago.
Tonight he's playing with the band for, unfortunately, a very short set as they're only playing 4 songs.There are many other bands on the bill tonight.
We're talking 'classic rock' between Jeff Buckley & Eric Clapton 70's era. The musicianship is high and the band is tight and that's the kind of music that we like here @ Rockerparis.
Check them if they're playing a club near ya.: http://www.johnmitchellfleet.com/