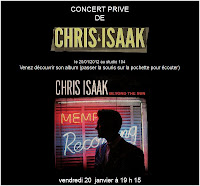 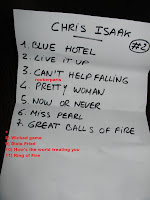 Chris Isaak tonight for a tv recording playing his brand new album of Sun records cover.
Smartly dressed as usual playing with his band of 26 years.
The gig started nicely and smoothly with his hit song "Blue Hotel" before playing songs from the new album " Beyond the Sun" including covers from Elvis Presley, Roy Orbison & Jerry Lee Lewis who was introduced a s the King of Rock 'n Roll, I don't think he would approve that.
Chris' voice is still the same: perfect
I was wondering what's the point of playing such famous songs,everybody's covering the same ones, Sun Records has such a catalogue of great less known songs.
Even though his versions are very similar to the originals, the versions he's playing are so good that in fact you don't care and just enjoy.
He played a few extra tracks that were not on the setlist ending with Johnny Cash's "Ring of Fire".
Probably the best Album de la Semaine we attended in a long time.