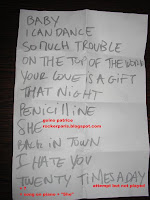 French female rock singer Izia is back with a second album "So Much Trouble".
We already saw her on stage several times, despite the fact that she's only 20, she opened a few years ago for The Stooges @ Palais des Sports and Motorhead last year.
Good old classic rock and a voice à la Janis Joplin, she's giving it all on stage.
We were lucky to be the first one to hear the new album in its (almost) entirety.
Maybe some songs need a bit more work specially the musicians' parts.
They tried the last song but she couldn't do it as her voice was fucked so we had another song instead ("?") then she played one very soft one on piano (great voice) , after discussions with the staff she played "She" one more time. They asked her for another one but she couldn't , she felt so sorry we thought she was about to break down in tears when she left the stage.

It will teach her a lesson she has to know how to save her voice and not giving it all like she did.
Don't worry baby you're young and you're doing very good.
Publié par Angelo Misterioso à l'adresse 12:11:00 AM