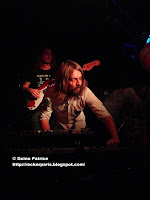 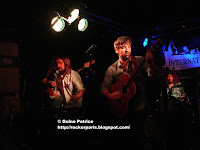 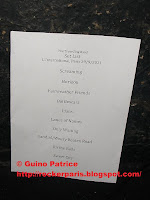 The Travelling Band, Folk band from Manchester, not to be confused with a CCR cover band, are playing the International club in Ménilmontant. As always @ L'International it's a free gig and drinks are cheap.
The weather has been wonderful this week in Paris, better than this summer, it's 10:00pm and it's still more than 25°C outside, perfect weather to have dinner on a terrace but tonight we preferred to get stuck in the basement of the club to attend this gig.
5 guys on stage with cool vocal harmonies à la CSN.
Most of their songs are folk but sometimes they did get angry and ended some of their songs like a heavy rock band which is the stuff that we like @ Rockerparis.
Or maybe was it because part of the audience in the back were talking too loud, we don't know but they should have listen to this band more carefully as they did a very good set
Folking & Rocking
Publié par Angelo Misterioso à l'adresse 12:11:00 AM