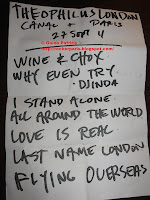 New american artist Theophilus London is doing promotion for his new (first ?) album @ L'Album de la Semaine.
I've been told it was Rap so I was a bit afraid, in fact not really, there's a real band with a drummer, bass player, two guitar players and a very sexy Asian girl as a DJ.
It's a mix of Hip Hop-Funk-Soul and rock, some of the songs are sounding a bit like N.E.R.D when they were doing some cool music a few years ago ( For "Fly or Die" ).
For the second song we had a super-hot & sexy female singer for some additional vocals.

Funny that we had to wait a couple of minutes between EACH song because Mr London needs to change his clothes for every fucking song. The band kept us entertained with some jam.
Even The guys in the band (minus the sexy DJ) changed clothes once.
Much better gig than expected.