The Soundtrack Of Our Lives @ Gibert Musique store for The Record Store Day
Paris April 16 2011 12:00AM 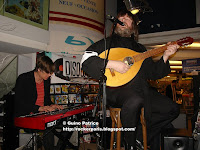 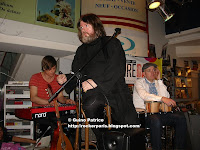 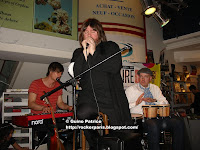 Swedish Psyche rock band The Soundtrack Of Our Lives is promoting the Record Store Day by playing showcases in Paris (@ Gibert in St Michel) & London for two shows.
It's early in the morning (for us) 12:00 am , lots of people and old geezers looking for collectors, most of the interesting vinyls were sold-out immediately when they opened this morning at 10:00 am.
As the stage is very small , we only have 3 of them out of the 6 members : the singer, the piano player and the percussionist.
The band is playing a 8-9 songs set for 40 min+ show.
Can't really tell you about the setlist but they've played a couple of covers including one from Nick Drake.
Cool set of 60's-70's influenced music

Then CARL BARAT who's playing later that saturday @ Trianon hall in Paris will make an appearance @ Gibert Musique in St Michel @ 3:00 pm to sign cds and vinyls for the record Store day.He will NOT be playing any music, sorry !
[NOOOOoo ! He was supposed to come and... he didn't turn up !!!]
Josh T Pearson will play a showcase @ Agnes B Store ( Rue du Jour) @ 12:00 am